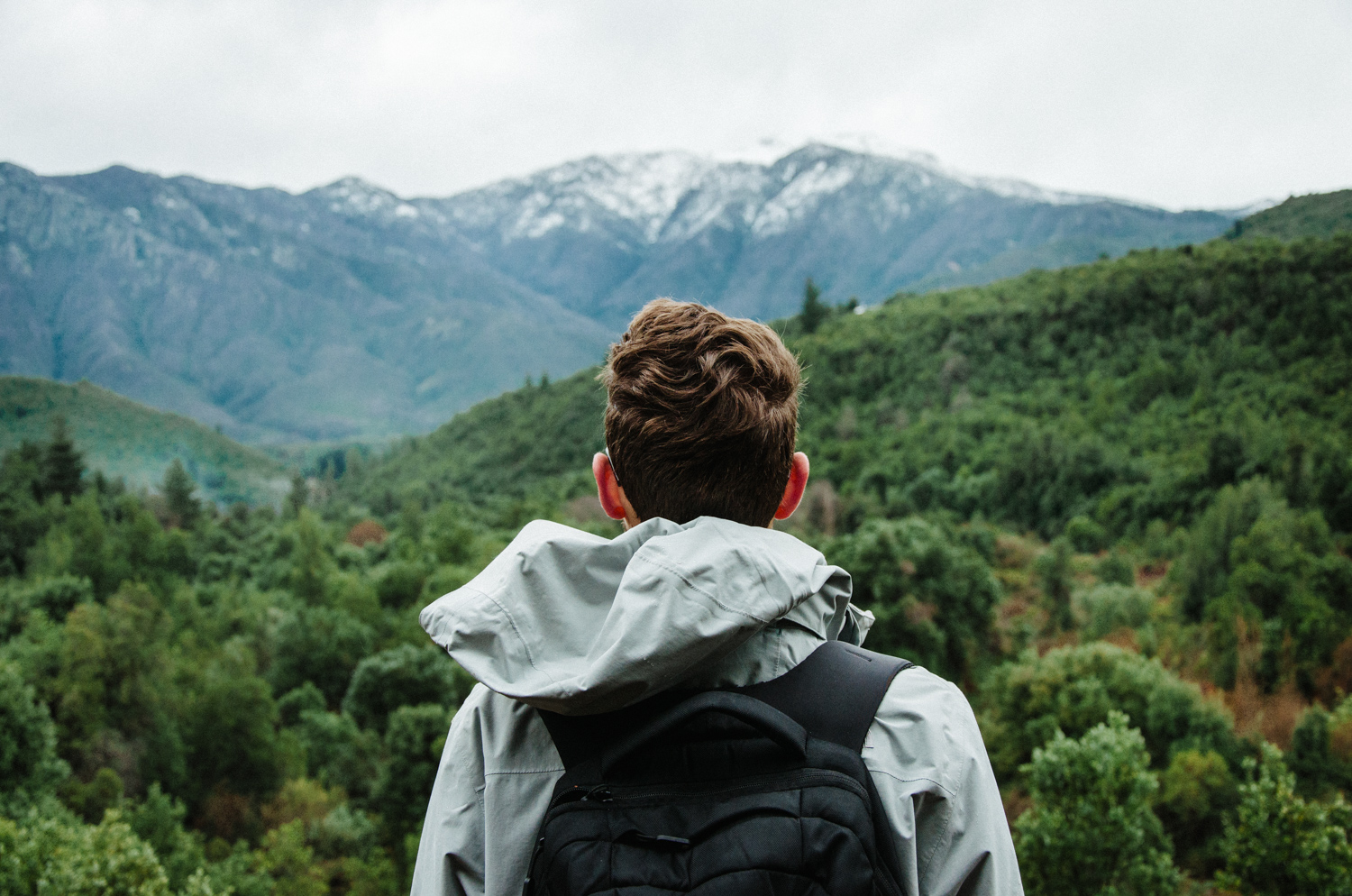 It rained, no, it poured, all day for two days straight before we saw a gap in the forecast that might allow us to explore these mountains in our backyard. Although we were thoroughly enjoying the days spent drinking wine by the fire, we were staying right in the foothills of the Andes and were anxious to get out and see the outdoors. So as soon as we saw a rain-free day we planned to make the most of it and spend the day hiking.

With a very rough map in hand we started out packed with food, water, and extra layers. The first stop on our map was a waterfall hidden amongst a bamboo forest. We walked towards the crescendo of rushing water as we parted the sticks of bamboo moving steadily through the forest. Once we spent significant time admiring the unique beauty of the lagoon, we continued on our way passing through sections of thick forest to wide open spaces where the vastness of the mountains was undeniable. Almost every half hour one of us gawked at the incredible view before us. 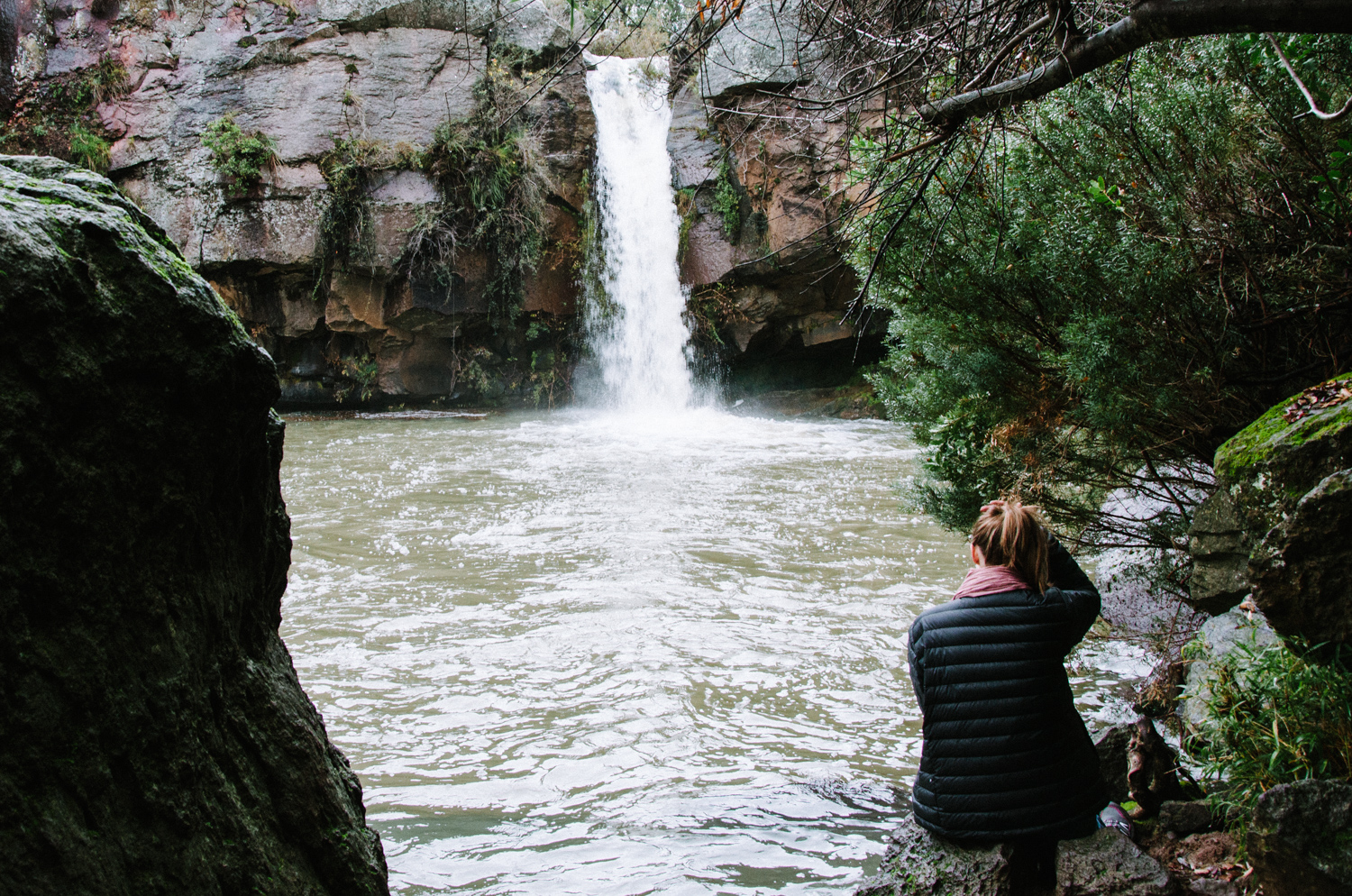 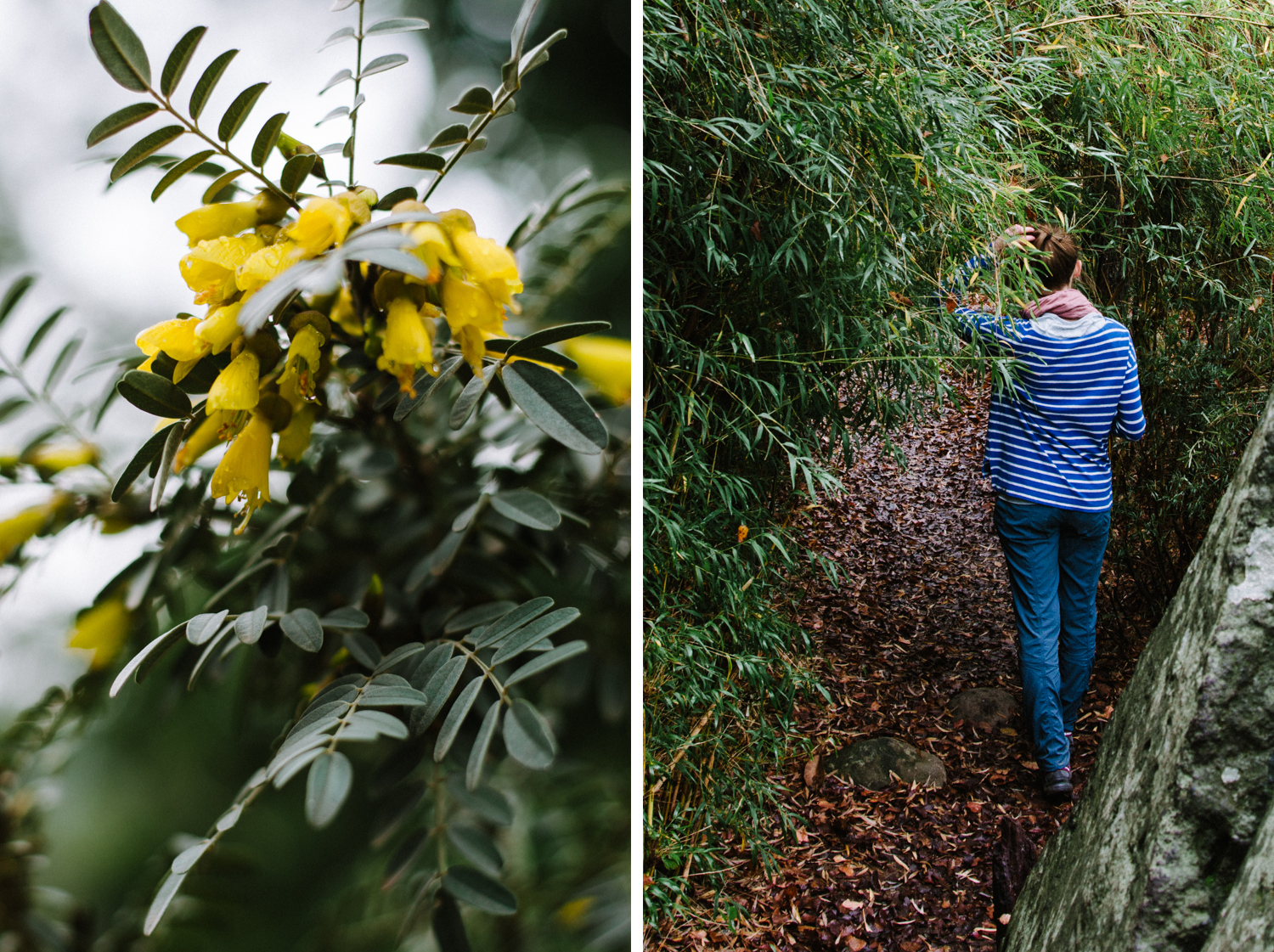 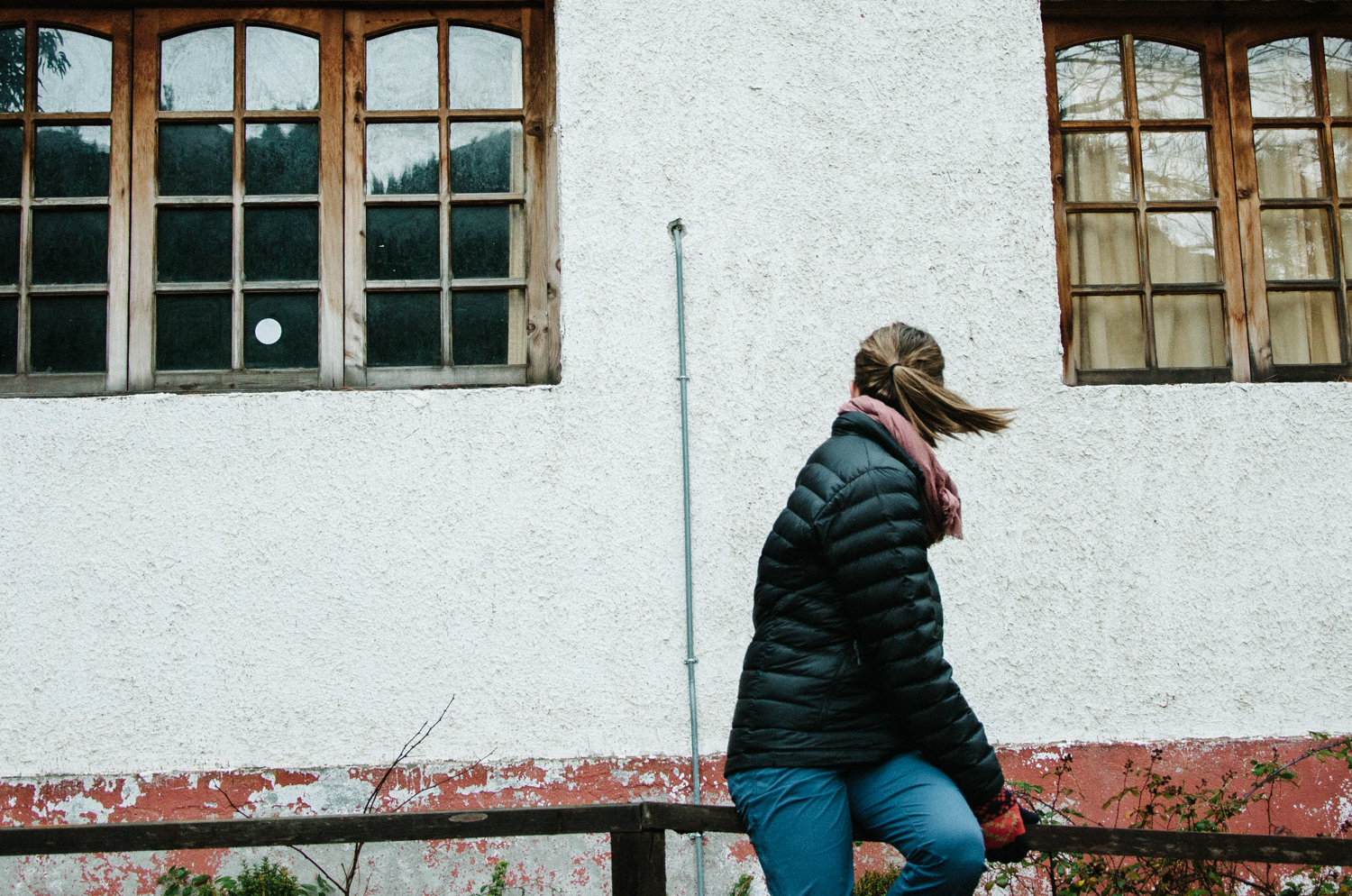 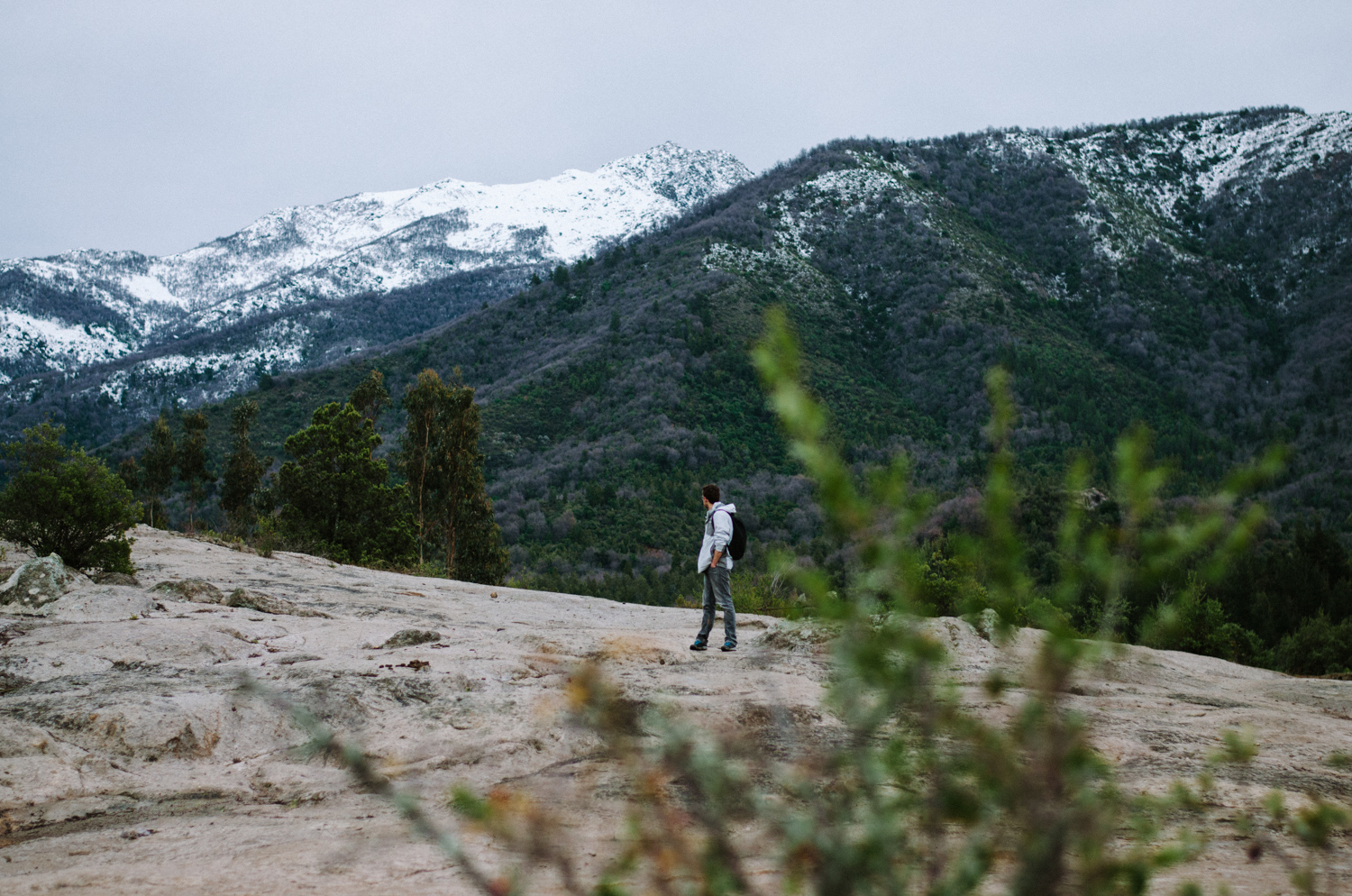 A couple hours in we had (unbeknownst to us at the time) completed the leisurely part and had begun to feel the effects of the hike creeping up our legs. Our shoes were completely caked in mud to the point that I had to stop every 15 feet to scrap off the excess mud. We climbed higher and higher, up steeper and steeper inclines, taking slow, methodical steps in the deep mud. After a particularly grueling climb we were met with the most incredible view looking out at all the mountain peaks around and below us. Standing there in awe of the beauty we almost forgot about our aching legs. We were convinced that the hard part was behind us and the remainder of the hike would be a breeze, nothing more than a peaceful stroll through the trees. As you might have guessed, we were wildly mistaken. 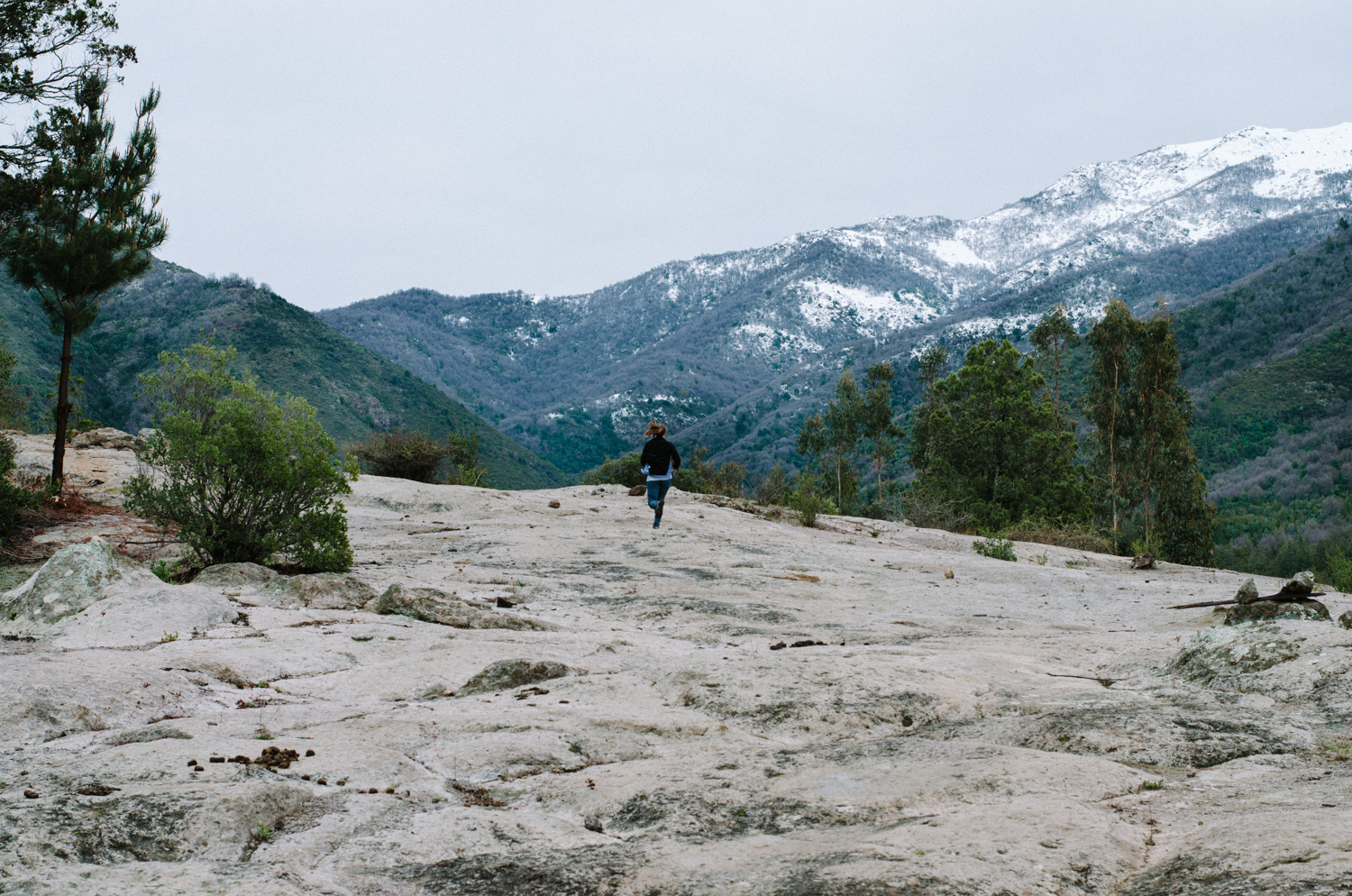 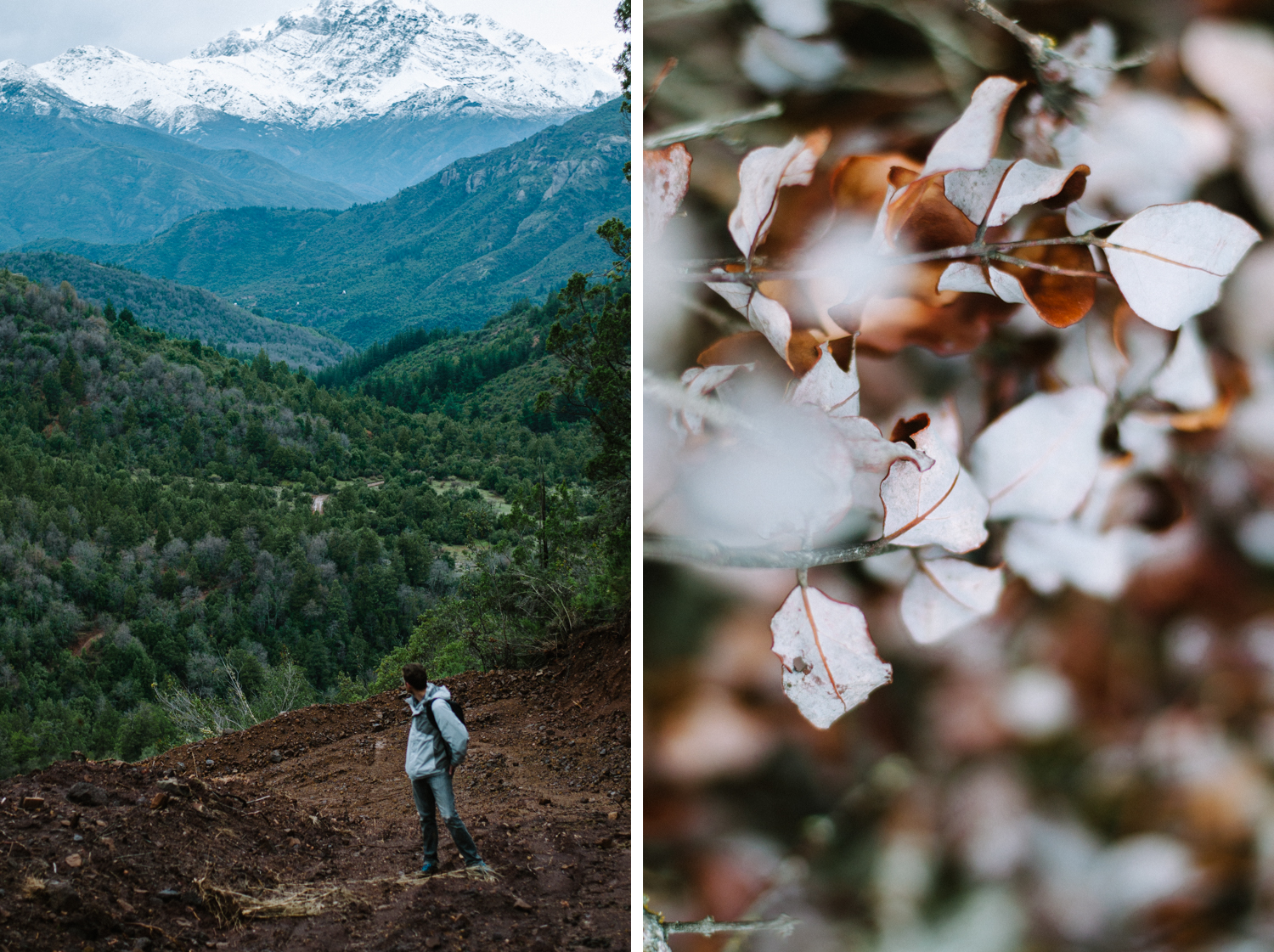 We were told before departing that there would be a small river that we would cross on our way back and this would be a key landmark to let us know that we were on the right track. Well, as I mentioned before, the previous days had been full of non-stop showers. So instead of the one small river we were supposed to find, we found ourselves head-to-toe with quite a few “rivers”. We had been walking for a while now without any real indication that we were on the right path or how far away from home we were. Time after time we crossed over (or through) extra full rivers with sparse stepping stones, trying our hardest not to end up with soaking wet clothes. At one point, after crossing our fingers extra tight that we had passed all of the rivers, we came across yet another one that completely immobilized us. We stood there on one side of the rushing stream scanning for any possible rocks peaking out of water, but there were none. Not one. So we looked from side to side, trying to figure out another way to get to the other side. To the left the only possible way over was engulfed in thorny bushes on both sides of the stream. To the right were wild bushes, trees, and more thorns. There wasn’t a good option. But we had to get across, that was the only thing we were certain about. Scott went first, pushing his way through the bushes of thorns to the right. I followed, still unsure if this attempt would be successful. We made slow progress, trying not to get whacked in the face by branches and keeping an extra eye out for the swarms of thorns all around us. Finally, only slightly wet and with no major encounters with thorns, we successfully made it to the other side and continued on our way (passing more and more streams along the way). 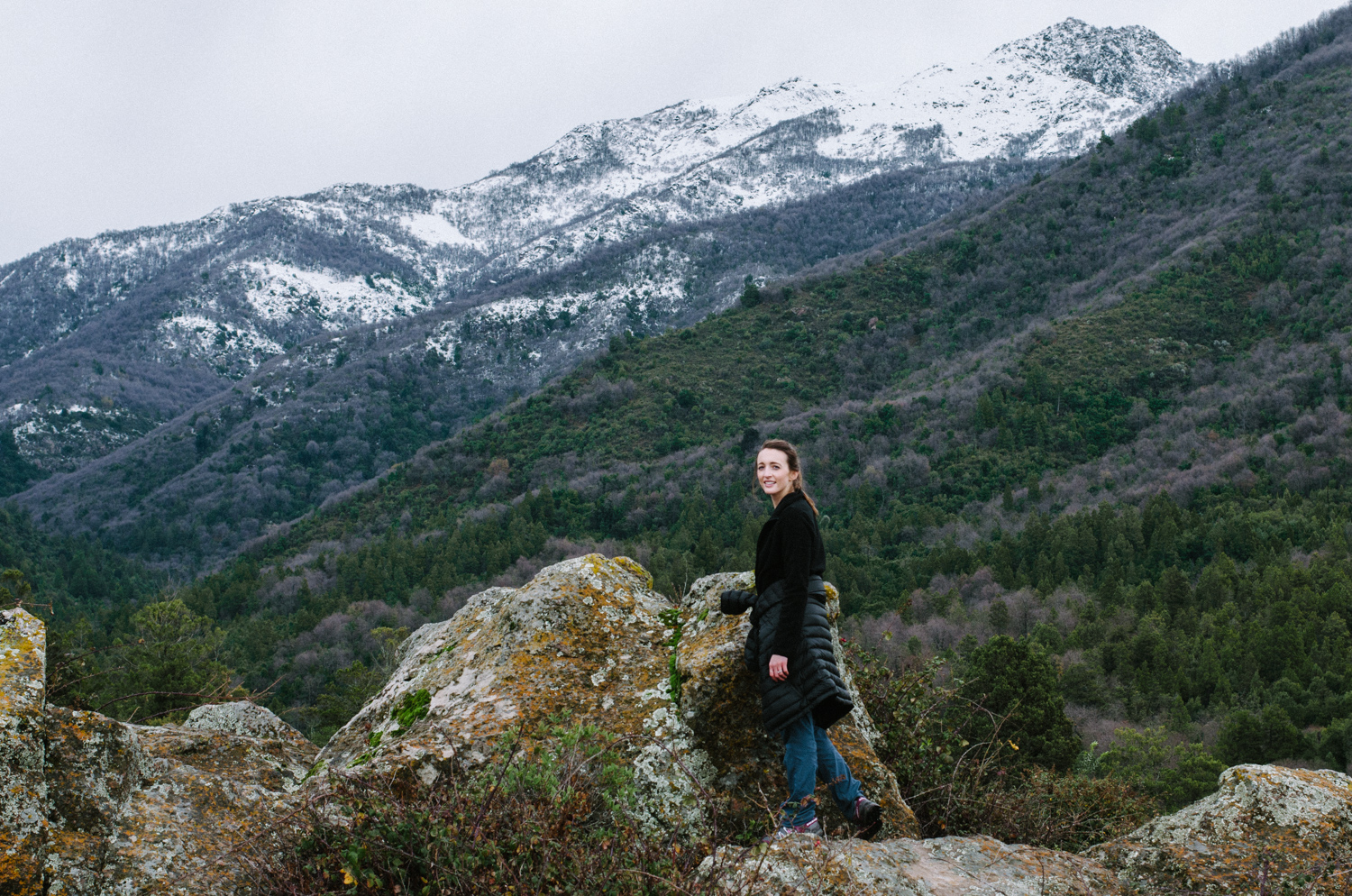 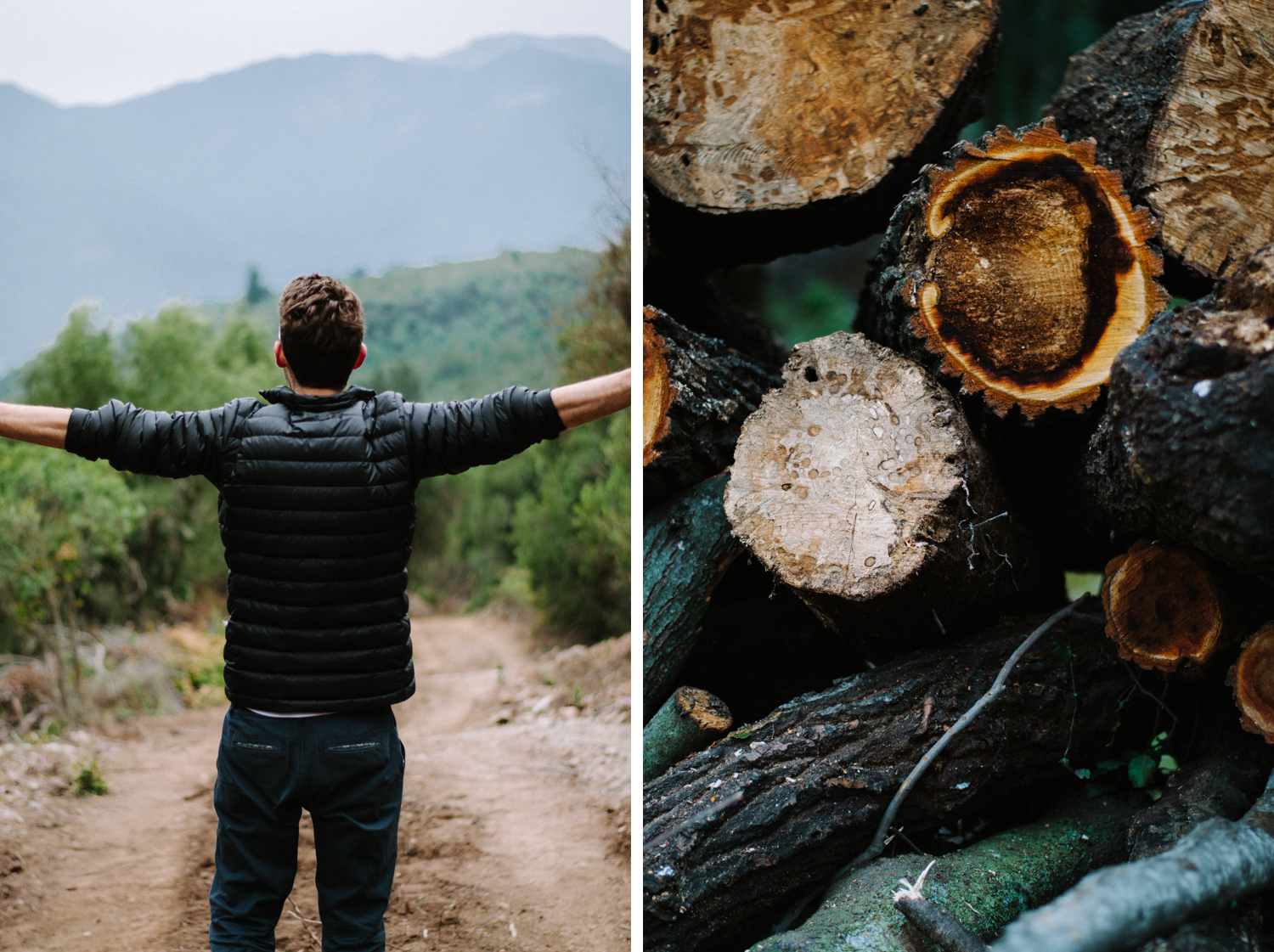 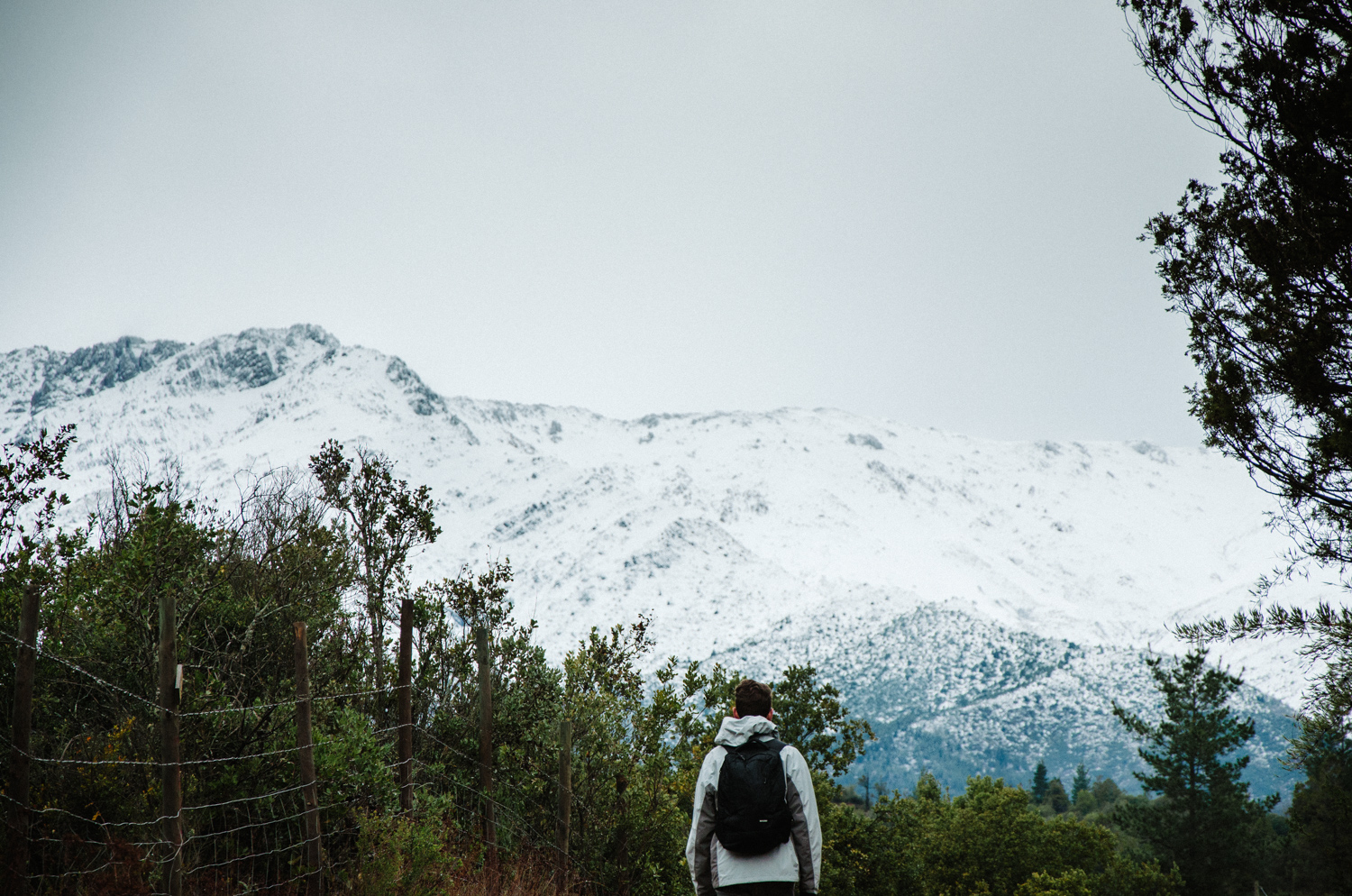 It was almost 5:00, about an hour before sunset and still not exactly sure how much longer we had left, when I stopped dead in my tracks. A lone horse, with a deep chestnut coat, stood still just a few feet in front of us. We walked slowly towards him, careful not to make any quick movements, and as we did three other horses appeared from behind the trees. It felt as if we were walking into a dream. They seemed to come from no where and belong to no one. As we turned the corner to follow the trail, several unhappy dogs approached, breaking the spell of the majestic horses. They stayed on our heels as we tried to calm them and leave their territory. All of the sudden, seemingly out of nowhere, a man grumbled something, quieting the dogs. We turned to the left and there was a small man, dressed casually in sweatpants and a light coat, approaching from a small wooden cabin. Since the trail had been completely devoid of any other humans I was completely taken aback by seeing another person and especially in this kind of situation. Right after I turned to say hello, I noticed there was a herd of goats huddled together near a pen higher up the mountain. I asked if I could take a picture of his goats and as soon as I did he responded with “Tengo jovenes atrás” (I have babies back there). He didn’t ask me to, but I followed him back into the muddy pen to find twenty baby goats, some as young as a few days old, vying for attention. I wanted to stay longer, but the sun was setting fast and we still had a ways to go. The moment that magical scene was out of sight I was reliving it in my mind, like it was all a wonderful, enchanting dream.

This story could go one forever with me recounting every small little moment that seemed so monumental at the time, but I’ll wrap it up. We walked until we hit a dead end and were pretty sure we had taken a wrong turn somewhere. It was sunset and I was panicking. There was no one to ask, no where else to go, so we turned and retraced our steps until we once again heard the sound of rushing water. We followed the sound to the top of a waterfall, the same one that we had visited at the beginning of our trek in the morning. This was not where we were supposed to be, but at least it was something familiar. The only thing we felt sure about in the moment was that we needed to be on the other side of the waterfall and then we could find our way home. Our shoes were muddy, slippery and the rocks were covered in water, but we took a deep breath, stretched our legs out as far as they could reach and lunged from rock to rock until we finally landed on the other side. The relief that I felt was so immense that it was as if we had just been through a life or death situation through the depths of highly dangerous white water rapids. It was exaggerated for sure, but dang it felt good. And so did that warm shower and glass of wine waiting for us when we made it back home.